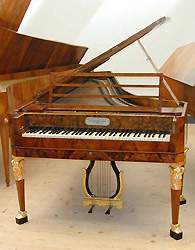 Donat Schöffstoss (1773-1811) was the son of organ builder Franz Schöffstoss. As a young child, his father deceased and his mother soon married the successful instrument builder Anton Walter (1752-1826). Donat and his brother Joseph became their stepfather’s apprentices and soon learned how to produce their own instruments.

An instrument of Donat Schöffstoss is now in the Museum of Musical Instruments Kremsegg Castle, Kremsmünster, Austria. The physically modelled virtual copy for Pianoteq is based on this very instrument. It offers the typical delicate Viennese action which gives it a slightly gentler sound than the more sturdy English variants