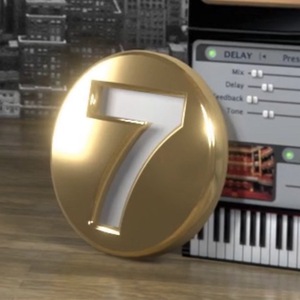 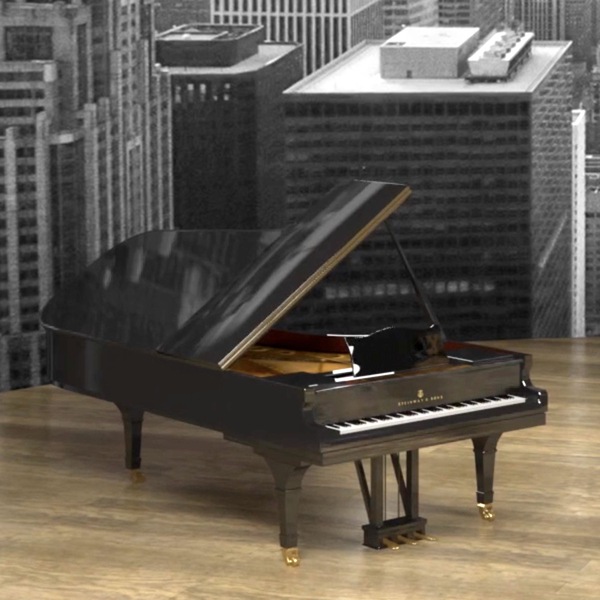 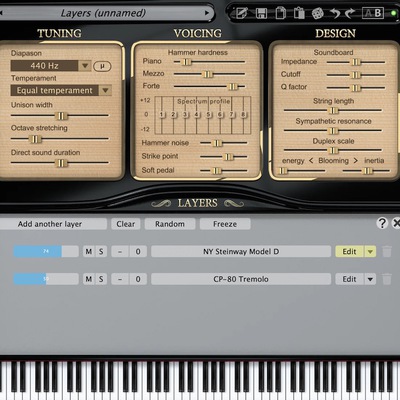 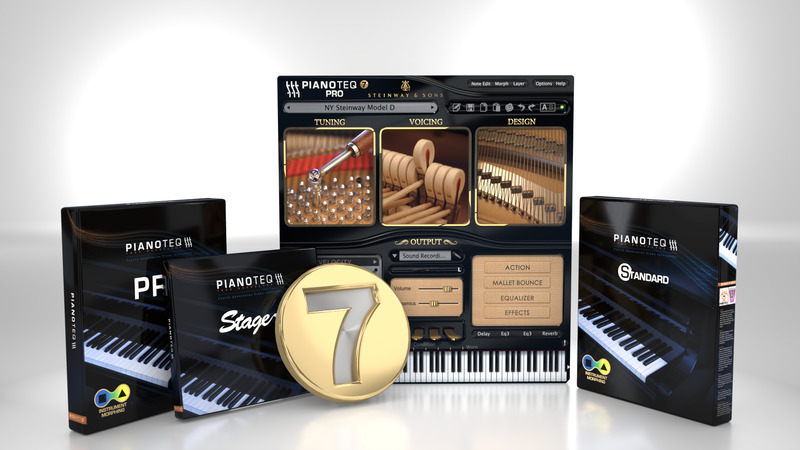 Pianoteq is an award-winning virtual instrument which you can install on your computer (PC/Mac). It is available for Windows, macOS, and Linux, and will even run on some ARM-based boards such as the Raspberry Pi. It can be used both in standalone mode and as an instrument plug-in in VST, AAX, and AudioUnits hosts.

Pianoteq offers superior playability and reproduces the complex behaviour typical of real acoustic instruments. Moreover, it lets you tweak the sound to your taste with the help of unique parameters. The Pianoteq sounds are authorized by Steinway & Sons, Bechstein, Petrof, Blüthner, Steingraeber, Grotrian, Hohner, among others.

Because there are no samples, the file size is just a tiny fraction of that required by other virtual instruments, making Pianoteq perfect for any modern laptop. Installation is simple and fast.

Tim Hinkley
tour & session keyboardist
Van Morrison, George Harrison, The Rolling Stones
«It really shook me when I discovered that a software instrument can beat a miked up real piano.»

BT (Brian Transeau)
composer & producer
Sting, David Bowie, Peter Gabriel and Madonna
«Finally it is here, a piano model that surpasses in detail, nuance, accuracy, playability and elegance the most sophisticated of sample based libraries.»

Wang Leehom
singer, songwriter, actor, film director
a.k.a. The King of Chinese Pop
«Pianoteq is my go-to plug-in. It's super easy to use and easily configurable with parameters that matter.»

«Pianoteq is simply the only plug that allows you to work the sound of the piano like a real one, and more than that!»

Jeff Wolpert
engineer, mixer, producer, editor
Loreena McKennitt, Holly Cole, The Cowboy Junkies
«I recently used Pianoteq on a CD for The Canadian Tenors. I appreciate the low processor overhead and the quality of sound.»

Richard Harvey
film composer
The Da Vinci Code, Eichmann, Les Deux Mondes
«Terms like sampling, modelling or plug-in, are not entering my head here... because for me, Pianoteq quite simply IS a piano!»

Paul 'Wix' Wickens
keybordist & musical director
Paul McCartney, Bob Dylan, Nik Kershaw, Bon Jovi
«I have been a fan of "Physical Modelling" and it's potential since the earliest days and Pianoteq has been on my computer from it's beginning.»

«It's hard to believe that such an impressive piano sound can come from a 15 MB software plug-in. It sounds far more vivid and realistic than the sample libraries I've tried.»

Rik Simpson
producer
Jay Z, Portishead, PJ Harvey, Coldplay
«To be able to have an amazing sounding piano with such a tiny footprint, both in terms of CPU and disk space is indeed a wondrous thing.»

Mikey Rowe
musician
Sheryl Crow, Oasis, Mick Jagger
«Pianoteq works. It's small, believable and playable. I find myself playing it for enjoyment as well as getting it to work within a track.»
More artist quotes
Pianoteq compatibility 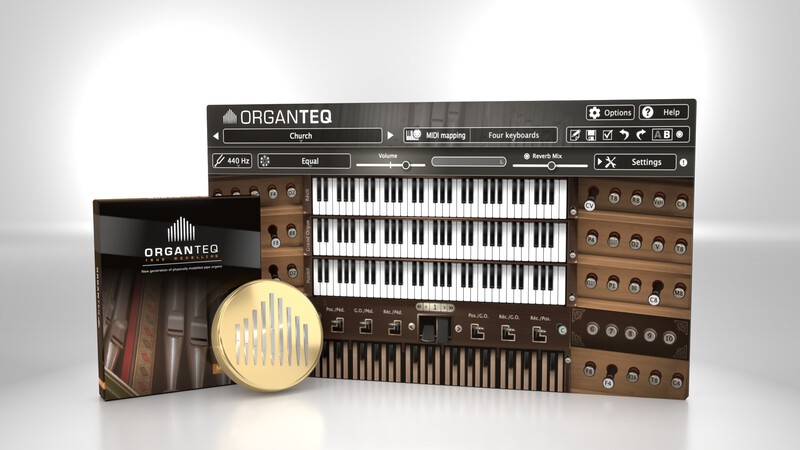 Organteq is a physically modelled pipe organ for MacOS, Windows and Linux (x86). It includes a standalone version and 64-bit plug-ins for VST, AAX, and AudioUnits hosts.

The organ sound is generated in real time from scratch, reproducing the typical and variable pipe attack transients “chiff” as well as the 3D configuration, where pipes are located in space according to their keyboards. Even the action noises from keys, stops and couplers are modelled. All this makes the instrument livelier than sample based variants, bringing more realistic variability in attack and sustain.

By omitting usage of samples, the file size is just a tiny fraction of that offered by other virtual organs, perfect for use on any modern laptop. Installation is simple and fast.

J.Ralph
composer
producer, singer/songwriter
«Organteq is incredibly lifelike and transportive. It is super fast and easy to use, Immediately inspiring for writing and greatly elevated the production to another level.»

John 'Rabbit' Bundrick
keyboardist and composer
Bob Marley, The Who, Johnny Nash
«Never mind the other organs. USE THIS ONE. I was using the demo for while, just to see what it was like. I told myself, "I wish I could use it in Logic." So I bought it, and it is absolutely fabulous.»

Ramin Djawadi
composer
Game of Thrones, Iron Man
«Organteq is modeled with such detail that it feels and sounds like a real instrument of the highest quality. This instrument contains a vast array of distinct, colorful pipes complemented by organically integrated noises that make for incredibly natural and compelling performances»
More artist quotes
Organteq compatibility 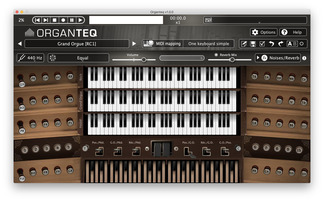 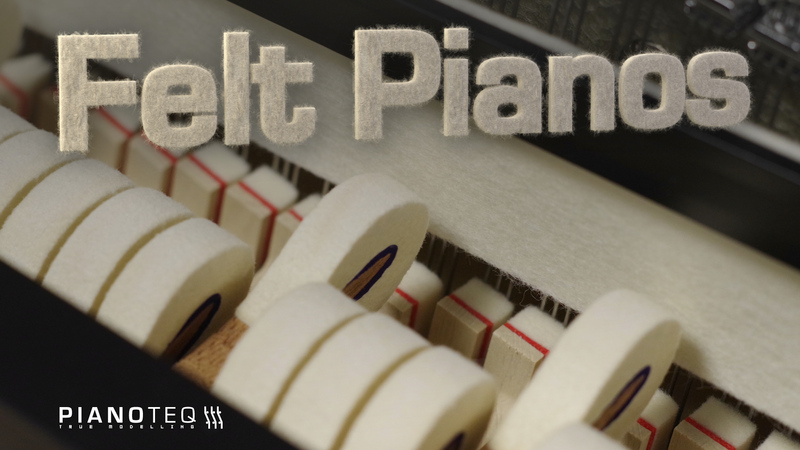 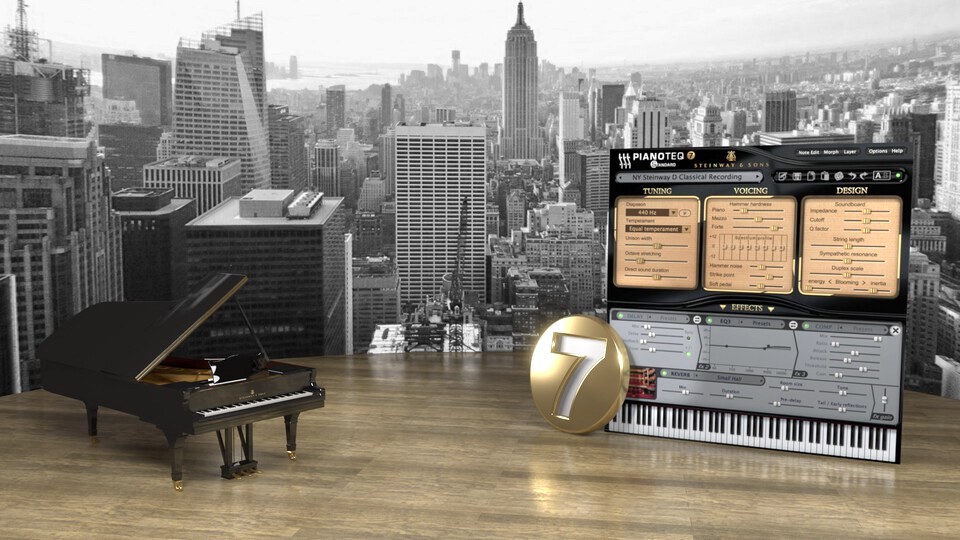 It is here! Pianoteq 7 (Standard/PRO) introduces acoustic Morphing and Layering. This innovative technology lets you create and mix hybrid instruments with stunning authenticity.

Moreover, all piano models in Pianoteq have been refined by using a new string/soundboard modelling (double polarisation), bringing longer and more complex tones with a three-dimensional character. 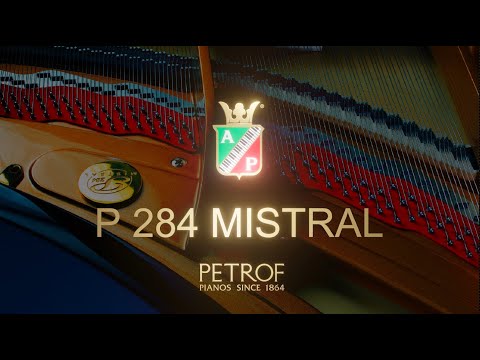 We are proud to present PETROF 284 Mistral concert grand piano, loved for its tremendous bass and resonant treble and for possessing the soft, romantic tone that is so characteristic of all PETROF grand pianos.

This instrument is authorized by PETROF and it makes use of the new Double Polarization string vibration model introduced in Pianoteq 7.